Port of the the WP 34S calculator (open source firmware for the HP 30b/20b calculators) to Android.

You can install the latest release (0.0.5) from Google Play. Alternatively you can compile the .apk from source (See BUILDING.md for instructions) and copy it to the device using adb or a web server, or get it from here and install it (unsigned)

Note that as an early release it may crash unexpectedly. 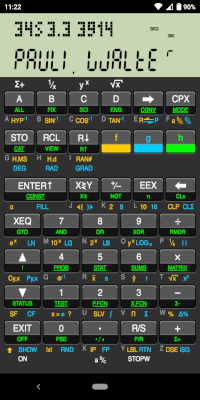 At this directory in sourceforge you will find a beginners guide WP_34S_Beg_Guide.pdf and a comprehensive manual Manual_wp_34s_3_1.pdf. The manuals apply in their entirety to this port.

The WP 34S is a calculator firmware that converts certain calculators (HP-20b and 30b) into calculators that are:

This android port maintains the first three benefits. As the actual hardware the WP 34s is based on is no longer in production and we all have a mobile phone around powered on at all times, having the port is almost (apart from the tactile feel of the keys themselves) as having the real thing.

The WP 34s project has an IPhone app, but no Android app. Wanting to learn about Android and NDK development, I did this.

I labeled this as a port rather than as an emulator as it is not emulating the CPU of the physical device. The firmware itself originally written in portable C is compiled along with the Android Native Development Kit (NDK).

The code for the interface and modifications to the WP 34s firmware are Free Software and released under the GNU Public License v3, as the WP 34s code itself.

Thanks to Walter Bonin, Paul Dale, Marcus von Cube and the rest of the WP 34s contributors for the excelent calculator.